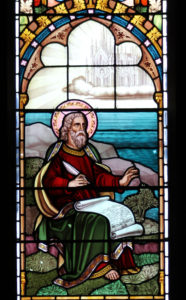 I thought I would share with you a few tidbits about the middle window below the Last Supper window. The window depicts St. John, our patron saint. He is shown writing the Book of Revelation on the island of Patmos. The crimson under-robe denotes the Holy Spirit. The green outer robe denotes the victory of life after death. There is a scroll in his lap. He holds a quill, but has paused to gaze on the vision of the New Jerusalem descending from the heavens. New Jerusalem is represented as a great temple.

The window was donated in honor of Mrs. A.M. Richman. According to Rev. Montanus, the money for the window was raised by her Sunday school students and other friends. But that is only a small part of the story… Amanda and her husband Charles came to Fort Saginaw from New York on the first steamboat to make it here in 1836. She and another couple that came on the boat were the first Episcopalians in Saginaw. They held services in the courthouse when they could get a pastor to come and preach. Most of the time they came together and prayed in each other’s homes. By 1851, she and 10 other Episcopalians in Saginaw decided to organize a church. Can you imagine?! 11 Episcopalians. Charles traveled throughout the east coast to raise money to build and furnish it. By 1853, they had enough funding raised to break ground. It was completed in 1857—4 years later. She died in 1883, the year this church was built. In recognition of her work, a copy of her obituary was placed inside the cornerstone. She was referred to as the “Mother in Israel”— a term that refers to Deborah in the Book of Judges. It is used to speak of a woman who has such faith and trust in God that she inspires others to have the same trust and faith.