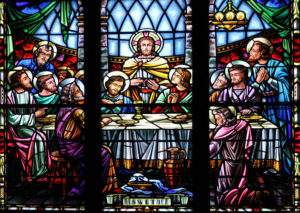 As today is Palm Sunday, let’s turn our attention to the set of windows reminiscent of DaVinci’s Last Supper. Christ is standing behind the table with the apostles seated. The urn, basin and towel sit on the floor soon to be used by Christ to bathe the disciples’ feet. Platters and chalices are scattered on the table as though they have just finished their meal. Above the window is a thin band with a symbol on each side of Christ’s head. On the left is a bunch of grapes, indicating wine; to the right is a standing sheaf of wheat, indicating bread; together they represent the bread and wine of communion. Below are three symbols. On the left are three intertwined fish in a circular form, symbolizing the Holy Trinity. In the middle is a lamb, as Christ is the sacrificial Lamb. On the right is a royal orb, a symbol of Christ’s kingship. The window was placed in the first decades of the 20th century.

The inscription at the bottom reads simply “Swett.” Everett and Genevieve Swett were married here at St. John’s in April 1920. Everett was a railroad engineer for 52 years, the son of a railroad engineer. Genevieve was the daughter of a farmer from Fremont Township. She was a member of St. Martha’s Guild, here at St. John’s, and the Saginaw Woman’s Club, a very active garden club in Saginaw. Knowing that they were married in 1920, and how long the window has been in place, I suspect that it was a wedding present. St. Martha is the patron saint of servants and cooks. She is known for her hospitality and serving Christ. St. Martha’s Guilds generally are the church hostesses. How fitting then that Genevieve’s devotion to the guild and being a hostess be represented with the Last Supper. Genevieve and Everett died in 1961, several months apart. There were no children.